Bark in the Park (2008) may seem like the obvious place for a dog lover but because I have 'been there, done that', the Whitewater Center's Olympic trials won my attention on Saturday, April 26. I have nothing against Bark in the Park - a wonderful event that I would have gladly attended again this year - but forced to pick between two dog-friendly events on the same weekend, many dog lovers made the same decision as me and took their pets to a world-class sporting event. A bit pricey for people - it cost me $55 to park my van and gain admission for two adults and one child - pets were actually a better bargain as companions to the Whitewater Center this weekend as they were admitted for free! (Sorry, Blanco and Okami, I should have brought both of you with me and left the human pack members at home.) 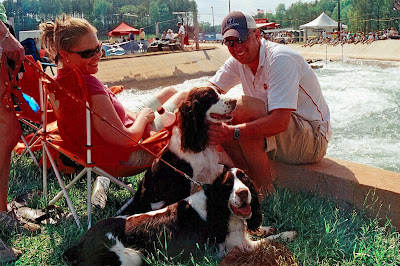 Springer spaniels, Olive (front) and Tillie, live close to each other in Charlotte and visit the Whitewater Center about once a month, according to Olive's owner, Amy Zimmerman. Olive didn't have a favorite competitor in the slalom on Saturday, said Zimmerman, but she did have a favorite event: taking a quick splash in the "river" before the race began. Tillie, however, was pulling for all the women in the kayak competition as stated by her owner, Leah Smith. (In addition, to world class sporting events, I'm told these two sophisticated pooches also frequent the Mint Museum of Charlotte but that's another photo-op.)

Dobermans, Charlie Brown and Lucy (front), lead their owner Madeline around the Whitewater Center on Saturday. 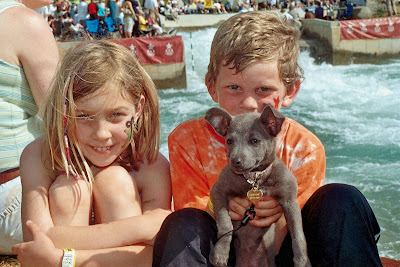 
Doug Gailor of Weddington and his nine-year-old terrier mix, Stillwell, stand by the Dragon Boat Association display at the U.S. National Whitewater Center in western Mecklenburg County. Gailor's daughter, Rachel, works at the center. Doug and Stillwell were rooting for Rachel's friend, Pablo McCandless, to win a spot on the Chilean Olympic team for the Beijing Games.

Where are your pink "I love Pablo" t-shirts, guys?

Five-year-old German Shepherd/Lab mix, McAlister had his hair cut for his first visit to the Whitewater Center, said his owner Courtney Adams, a Cabarrus College student.


While eating dinner at the Whitewater Center's restaurant/bar, I noticed Nora, a shepherd mix just under two-years-old at a nearby table with her guardians from Project Halo.
The group's volunteer coordinator, Heather Stickney, said Nora was rescued three months ago from a home where she and eight other dogs spent all their time tied to trees and surrounded by broken beer bottles. Nora was so severely neglected by her owner that she had heartworms and such a bad case of mange that she'd lost fifty percent of hair, explained Stickney. Young Nora was not spayed and had had at least two litters of puppies, she said.

Thanks to a concerned citizen who convinced the owner to give up some of the dogs, Project Halo has been able to provide Nora with foster care and medical care. Nora is now heartworm-free, mange-free, spayed, vaccinated and well-socialized enough to attend world class sporting events. If you are interested in giving this well-behaved girl a permanent home, contact Rhonda Thomas at projhalo@bellsouthnet or call 704-562-8939. 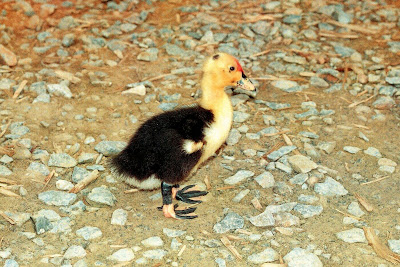 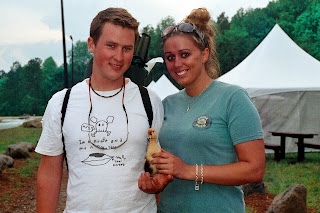 Chris Osborne (left) of Spartanburg, SC and Marisa Serrat of Cleveland, Ohio met at Clemson University and fell in love. Naturally, the next step was to adopt a duckling!
Kuhsie, a magpie duck, goes everywhere with the couple - including kayaking. Kuhsie will weigh four pounds when she is full grown and have black and white spots. (Kuhsie is German for she cow. ) Check out this couple's travel blog.
Posted by Deborah Parkhill Mullis at 7:10 PM