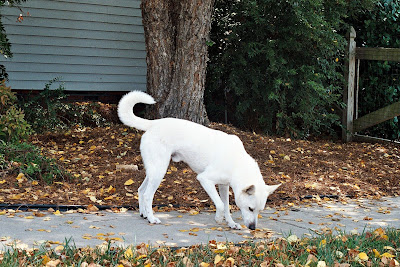 Blanco, my 4-year-old husky-terrier mix can enjoy his yard
again even though he is highly allergic to the river birch
tree seen in the background.

When Blanco, my three-year-old husky-terrier mix began biting, chewing and scratching his skin relentlessly last spring, I sought help. Although many might attribute this kind of irritation to fleas or mange, the source of Blanco's fidgetiness proved to be inhalant allergies - or what could be called canine hay fever.

Canines aren't spared spring's allergens; the symptoms just manifest differently than in humans. It's unusual for dogs to sneeze or have runny eyes due to airborne particle sensitivity or atopy. Atopic dogs are more likely to develop skin problems - the No. 1 reason for veterinary visits according to research by the pet insurance industry.

Because pollen cycles for trees, grasses and weeds overlap, some type of pollen is always in the air - not to mention canine nasal passages - from late February until mid November in North Carolina's Piedmont region.

"In an area like this where there is high humidity, mild temperatures and no steady winds to blow the pollen away; it doesn’t take much to push a dog over his allergy threshold," said Dr. Hombs. Add a little construction dust, some industrial pollution and a lack of rain into the mix and susceptible dogs will start to show symptoms like irritated ears and itchy red skin, she explained.

Traditional veterinary treatments like antihistamines and corticosteroids can relieve symptoms but also can cause dry mouth and increase the dog's heart rate, said Dr. Hombs. In addition, some corticosteriods weaken the skeletal system, make dogs jittery and cause them to overeat, she continued. Allergy shots are an option if allergy testing can pinpoint just two or three allergens. Over several weeks, Blanco's symptoms led veterinarians to suggest all these treatments, in turn.

Next, one antihistamine - and then a second - left Blanco drowsy, upset his stomach and didn't relieve his itchiness. Then a prednisone injection was suggested, and allergy testing was mentioned. I did not want to subject an otherwise healthy dog to a steroid injection that would stay in his system for several weeks so the torturous cycle continued.

By summer, Blanco and I had both had it! My tears fell to the floor along with what was left of Blanco’s beautiful white fur as I stroked his thinning coat and had a good cry. Determined to do something, I decided to research alternative treatments for inhalant allergies in dogs and ended up at Clara's Choice for Herbs in Indian Trail. It was there that I was referred to Atrium Animal Hospital: http://www.atriumanimalhospital.com/

After taking a medical history and giving Blanco a physical exam, Dr. Hombs pointed out that the red skin on the inside of his thighs indicated inflammation. "It should be pencil eraser pink," she said, and prescribed a high quality Omega-3 fatty acid capsule formulated for dogs. A natural anti-inflammatory, Omega-3 fatty acids are also good for brain development, Dr. Hombs said.

"If there is one thing I would recommend (for dogs in allergy crisis) it would be Omega-3 fatty acids but be careful of the source," explained Dr. Hombs, "Sardines, herring, mackerel - all those little cold water fish are loaded with it and their tiny bones are a good calcium source, too."

Dr. Hombs also prescribed a homeopathic combination of Chinese herbs to relieve Blanco’s itchy skin. At first, he wanted nothing to do with the pungent powdery herbs; however, hiding Chinese tea pills - tiny round pellets about 1/4 inch in diameter - in his food worked like a charm. Although, I thought I was giving my dog high quality nutrition, Blanco's food, a mixture of dry food and canned food, also drew scrutiny.

"Most dry goods are highly processed and lack nutritional value. For a dog with inflammation, dry food can be compared to putting dry kindling on a fire," explained Dr. Hombs. "The carbohydrates are transformed to sugar and sugar inflames."

Dogs with allergies need plenty of nutrients to help their immune systems deal with the problem, she said. Foods with antibiotics, dyes, growth hormones and preservatives will only exacerbate symptoms.

Blanco was given a more natural diet, primarily of raw beef. This would help clean his blood of all the drugs he had been given and provide nutrition closer to what he would get in nature. This could be complemented by a list of "cooling foods" to ease Blanco's inflammation. Plain organic yogurt was added to help his digestive tract absorb nutrients. Blanco thinks yogurt is a fine treat!

After a few weeks on his individualized holistic regimen, Blanco showed dramatic improvement. He stopped biting at his skin, scratched less and starting to get his beautiful white fur and his spirit back. After a few months, I thought he was good as new.

Even though Blanco was well, I saved up the money and had an allergy test done to satisfy my curiosity. The chief offender turned out to be the big river birch tree in my backyard. River birch trees are common here so cutting it down wouldn’t help the situation and as Dr. Hombs predicted Blanco was allergic to more than one thing.

"Allergy testing is limited as far as accuracy," said Dr. Hombs, adding that the allergens a lab might list for the Southeast might not be localized enough to generate medication ideally suited to your pet. She recommended administering locally made raw honey instead: "What you are getting in local honey is fabulous. A company can’t possibly put all the allergens from your particular location (into a serum) but the bees do. They are tapping from all the local pollen."

So rather than give Blanco allergy shots, I opted for the holistic approach of a teaspoon of locally made raw honey once a day. I began giving him honey in January as it takes three to four months to desensitize a dog to allergens this way. The real test came this spring when the river birch tree once again filled the backyard with long squiggly strings of yellow pollen. Blanco and the holistic approach passed with flying colors.

Note: Never administer herbs to a dog or any pet without consulting a veterinarian trained in the use of herbal medicine.