Taking Dog Safety to the 'Max' 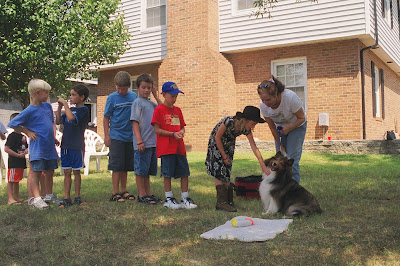 Above: Children in the Cherokee Woods neighborhood line up to learn the proper way to pet someone else's dog. Presented by "Max the Dog" and his owner Teresa Faucette, responsible pet ownership and dog safety shows are one way to address the ongoing issue of loose dogs in Indian Trail.
Below: Children learn about pet grooming and dog safety including what to do when a strange dog approaches: "make like a tree" if standing or "make like a rock" if on the ground.

September may be Responsible Dog Ownership Month but when she's not working at her regular job as a nutritionist, Teresa Faucette and her 4-year-old sheltie, Max, educate and entertain people about topics such as dog safety, fire safety, nutrition and responsible pet ownership every month.

Max is what trainers call a one in a million dog. Faucette has had other dogs but never one as gifted as Max. A canine good citizen and a certified pet-therapy dog, Max loves to perform and Faucette loves to teach. "He’s a show-off," said Faucette. Max and Faucette teach at churches, day cares, elementary schools, middle schools and perform demonstrations at special events. Now they can add dog-troubled neighborhoods to their list.

Recently, the two traveled from Mint Hill to Indian Trail to teach a group of children gathered at the home of Darlene Davis in the Cherokee Woods neighborhood. According to Davis, the neighborhood has an ongoing problem with dogs running loose. "People have resorted to carrying sticks," she said, noting that dogs have attacked two bike riders as well as a home owner who was getting out of her car in her driveway.

Although there hasn't been an incident in three months, Davis felt it was important to inform the children about responsible pet ownership and dog safety. "So far they've been lucky," she said, but now that school is back in session, children need to know how to react to a strange dog at the bus stop in the morning or walking home in the afternoon.

Cherokee Woods isn’t the only Indian Trail neighborhood having problems with pets that are supposed to be man’s best friends. For months residents have been complaining to town officials, writing to local papers and appearing before county commissioners to beg for a solution to irresponsible pet owners who allow untrained dogs to run free in densely populated subdivisions. Town officials say leash laws are not high on the priority list, so residents like Davis are finding their own safety solutions.

Max and his suitcase to the rescue

How many of you have dogs?" Faucette asked the group of boys and girls sitting in lawn chairs and sipping Kool-Aid. Most of the preschool to middle school age children raised their hands.

Faucette spread open Max’s suitcase on the lawn for a game of show-and-tell. On command, Max trotted over to his suitcase to retrieve his personal belongings one at a time as Faucette explained each item and its importance.

First, Faucette asked Max for his leash. Max located his leash among the other items in his suitcase, grabbed it in his mouth and carried it over to her.

"Good job," Faucette said as he let the leash go into her hand and sat down beside her. The sheltie tilted his head from side to side, his brown eyes following Faucette's every move.

"Why is a leash important?" she asked the children.

"So you can walk him," answered one boy.

So he doesn’t run loose," replied another.

"That’s right! And why is it important for a dog not to run loose?" prompted Faucette.

The children call out answers.

"He could get lost."

"He could get in a fight with another dog."

"That’s right. What if another dog is running loose and picks a fight with your dog?" Faucette continued.

"He could get hurt!"

Max returned to his suitcase to fetch his collar and dog tags for Faucette as she conducted another Q-and-A on the importance of ID tags and vaccinations. Next, Max produced a dog toy from his suitcase and pranced around with it. "Do any of you own dogs that chew on things they‘re not supposed to?" inquired Faucette.

"My grandma had a dog that chewed on everything - even my grandpa’s pants," said one boy. Faucette took this opportunity to talk about spending time with their dogs and training them to play with pet toys and not people's things.

"Dogs like to have something to do. It's important to train your dog to do what you want him to do," she said.

Then Max took the final four items out of his suitcase: a red bandana, a dog brush, doggie toothpaste and a doggie toothbrush. Faucette joked about how much Max loves to wear his bandana and look at himself in the mirror. A giggly discussion about Max's vanity, dog grooming and how to avoid matted fur and "stinky dog breath" followed.

The second part of the show addressed the serious issue of dog safety, with instruction about what to do and what not to do when a strange dog approaches. Faucette asked the children to stand and then Max, pretending to be a strange dog, charged at the group. "Make like a tree. Stand straight, cross your arms and look at your roots," instructed Faucette. The children folded their arms across their chest, stared at their feet and stayed as still as possible.

"Should you watch the dog?" she asked.

The children weren't sure.

"If you don''t know me and I go up to you and stare at you, does it make you feel nervous?"she continued.

"It makes a dog feel nervous, too," explained Faucette. "Dogs can't tell a person to stop staring at them, but they can bark, growl and even bite if you are doing something they don't like. Never stare at a dog. They consider it a challenge."

Next, the children crouched down on the ground to play and Max, again pretending to be a strange dog, crawled into their midst. They learned to cover their ears and "make like a rock" if they are on the ground when a strange dog comes along. Faucette emphasizes to never jump up, run away or scream. That kind of behavior can excite a dog, and then he may bite. Instead she told the children to count to themselves and remain still until the dog loses interest or an adult comes to help.

One girl asked what to do if a dog chases you while you are riding your bike. "That’s a good question," Faucette said. "Put the bike between you and the dog. Use it like a shield and make like a rock on the other side of it."


For the final part of the show, the children lined up and asked Faucette for permission to pet Max, which is the proper way to greet someone else’s dog. Max sat politely while each child took a turn stroking him under the chin or scratching him on the chest - not patting the top of his head or grabbing him, actions that are threatening to some dogs.

This article was published by Union County Weekly, Volume 2, Number 25 * Aug. 31 - Sept. 6, 2007. Deborah lives in Indian Trail, NC with her husband, two children, two dogs and one cat. When the children go to school and the pets take a nap, she does a little freelance writing.

Some of us started making noise about this six years ago. 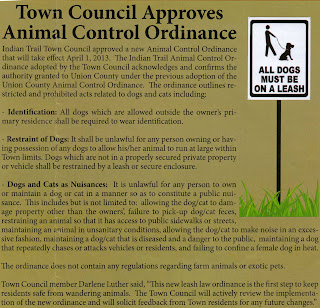